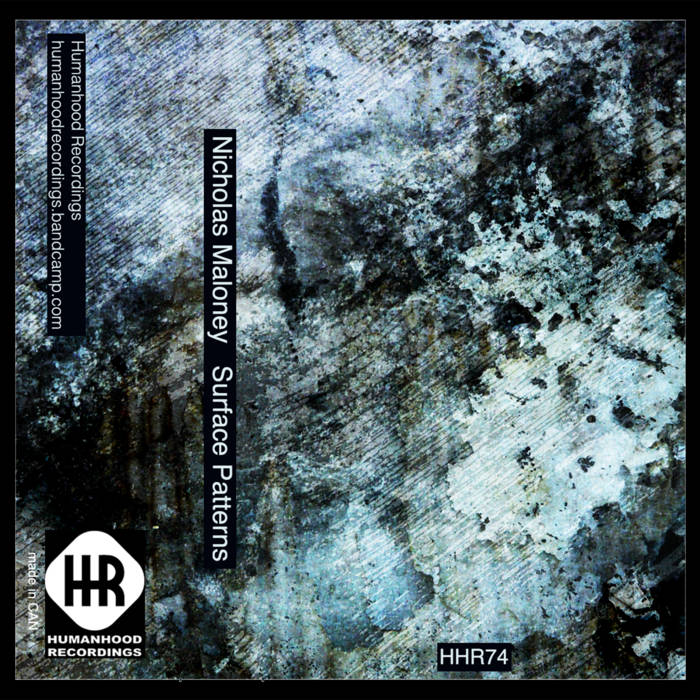 “Surface Patterns” is a piece composed of transfigured, contact-mic recordings of the surfaces of various structures within a variety of micro-environments. The physicality and sonic density of these environments are explored as textures flow, evolve, and unfold over the two sides.
Other sounds derive from samples/loops from old records, tape manipulation, and dialog with a painter, while, simultaneously, sounds from his brush and tools on canvas, as well as the vibrations running through various objects around the room, are picked up via contact mics and the acoustic properties of his studio are explored/transfigured.
Some guitar, synthesizer, and feedback was utilized in the ending movements of these two pieces, recorded under the same principle of human hearing – a pair of stereo contact mics were placed on the bodies of two acoustic guitars, suspended ear-width apart, as these sounds were played into an open room.

Maximum volume playback on speakers or headphones is recommended.

Nicholas Maloney is a sound artist from Jackson, Mississippi.
www.nicholasmaloney.com

humanhood recordings was started in 2016 with the mission statement to release the most interesting and oddest ambient, noise and experimental music we can find. we have worked with knurl, 156, mike shiftet, Joe+N, Z'EV, Timothy Garrett, Rudolf Eber and many others.

Bandcamp Daily  your guide to the world of Bandcamp